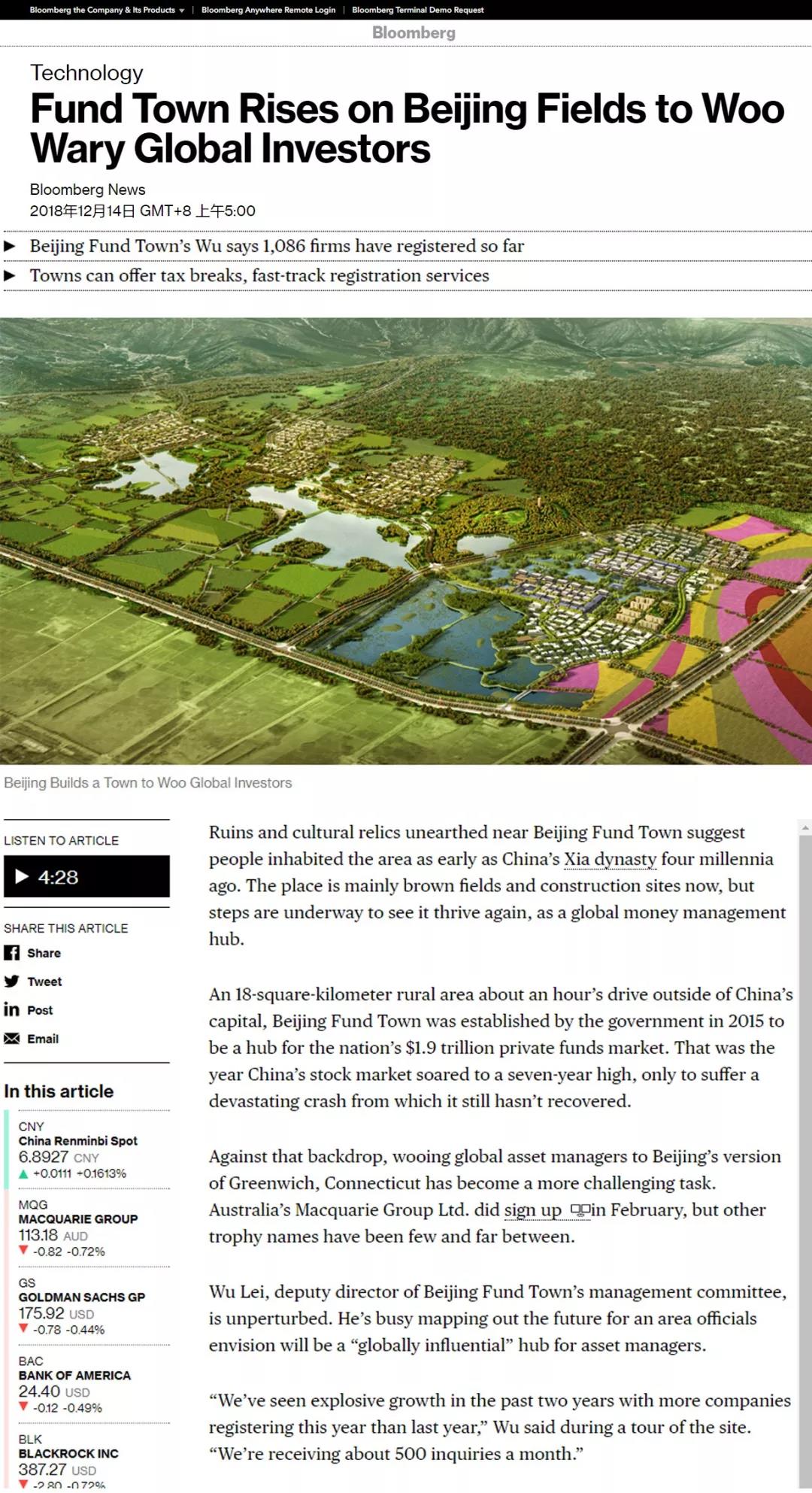 (Bloomberg)--Ruins and cultural relics unearthed near Beijing Fund Town suggest people inhabited the area as early as China’s Xia dynasty four millennia ago. The place is mainly brown fields and construction sites now, but steps are underway to see it thrive again, as a global money management hub.

An 18-square-kilometer rural area about an hour’s drive outside of China’s capital, Beijing Fund Town was established by the government in 2015 to be a hub for the nation’s $1.9 trillion private funds market. That was the year China’s stock market soared to a seven-year high, only to suffer a devastating crash from which it still hasn’t recovered. 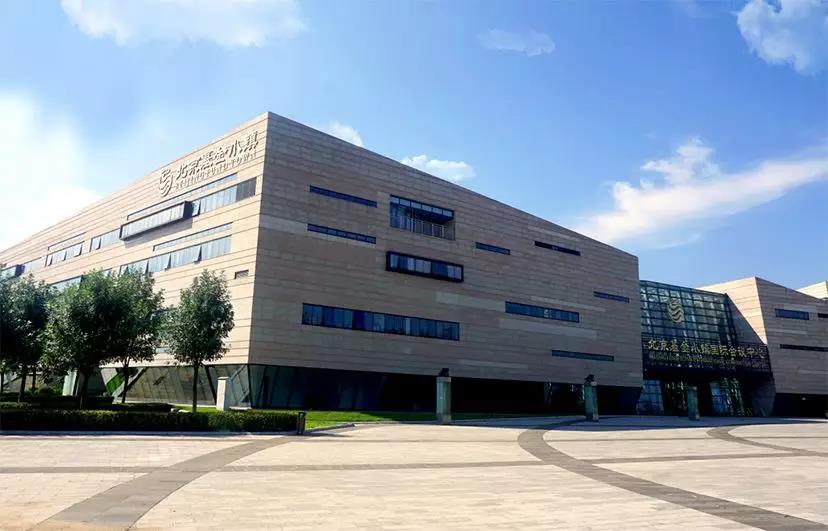 Against that backdrop, wooing global asset managers to Beijing’s version of Greenwich, Connecticut has become a more challenging task. Australia’s Macquarie Group Ltd. did sign up in February, but other trophy names have been few and far between.

Wu Lei, deputy director of Beijing Fund Town’s management committee, is unperturbed. He’s busy mapping out the future for an area officials envision will be a “globally influential” hub for asset managers.

“We’ve seen explosive growth in the past two years with more companies registering this year than last year,” Wu said during a tour of the site. “We’re receiving about 500 inquiries a month.”

Beijing Fund Town is in talks with a number of overseas firms, including some from Wall Street, said Wu, who recently came back from a trip to Taiwan to study eco-agriculture techniques he thinks can be applied there. He declined to name any names. 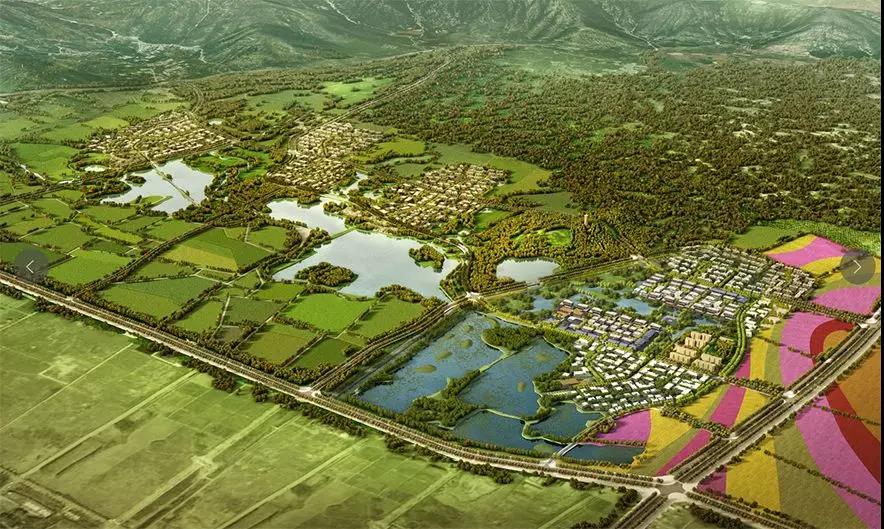 So far, 1,086 private fund management companies representing more than 1.6 trillion yuan ($233 billion) in assets have registered, although most won’t be able to move in until 2020 when construction is scheduled to finish. Private funds differ from mutual funds in that they can only be marketed to institutional or wealthy investors. Mutual funds, which can be sold to the general public, are regulated by the China Securities Regulatory Commission and aren’t a target of Beijing Fund Town.

Interest has been so strong, thanks to the town’s proximity to central Beijing and fast-track registration services, that Wu said officials have rejected some applications, particularly from firms deemed undesirable, such as those with ties to peer-to-peer lending platforms. More than 30 registered companies have been kicked out for various rule breaches, he said.

Fund towns in China -- or business districts built specifically to cater for certain industries -- aren’t new. There’s a similar one for hedge funds in Yuhuang Shannan, about an hour from Shanghai by high-speed train. It offers tax subsidies, and has attracted alumni of Goldman Sachs Group Inc. and Bank of America Corp. Another 15 or so such towns designated as financial zones are scattered across the country.

“Beijing Fund Town seems to have its own systems and measures to ensure the quality of funds registered there, as well as risk controls,” he said. “That may be able to provide a model for other fund towns.”

But while international companies including BlackRock Inc. and Bridgewater Associates LP are eager to expand in China, there are signs that the nationwide private-funds industry is cooling. Total assets fell slightly in October from the previous month, to 12.77 trillion yuan, official data show. And the Shanghai Composite Index is on pace for its worst year since 2011.

That doesn’t bother Zhang Qingyun, deputy general manager of China Vision Capital Management Co., whose nine equity funds are overall down slightly for the year. He says now is a “relatively good time to build up positions for the longer term because valuations have come to a low level.” China Vision registered with Beijing Fund Town in March 2017.

Besides being able to easily network with peers, China Vision wants to move to the town to help facilitate registration with local industrial and commercial authorities. That process has been difficult elsewhere, with companies with names containing words like “investment” and “capital” struggling as authorities crack down on illegal fundraising activities, Zhang said.

Wu, the Beijing Fund Town official, and his colleagues are busy adding the kinds of amenities that might appeal to global giants and domestic upstarts alike, such a hospital, a theme park and an international school.

“You never know -- a small company here today could well become a big global player in the future,” Wu said.

— With assistance by Dingmin Zhang